In the last post, I presented the idea of using a Mathematical Habits Checklist to try to help students develop a skill more useful even than perhaps any mathematical technique: the skill of developing habits that expand your knowledge and resources. We discussed the fact that ‘in the real world,’ people rarely take tests – instead, they complete projects. I also mentioned that accordingly, I will sometimes give Mid-Term or Final Exams that are open-note, open-resource. This allows students who studied well and don’t need to constantly use their resources to have an advantage on this two-hour exam, which could be thought of as a project under a very quick deadline! However, it also allows students who may not hold as much information in their heads, but have an ability to keep very organized resources (notes, can use a text well, etc) to still perform well on the exam, as long as they can use the resources fast enough to complete it in the two hours available.

The point that I want to make this week is that using resources effectively is a skill on its own. We, as educators – especially math educators – should be finding ways to teach the skill more effectively. It has been my observation that modern students often think that they should be able to just look up the answer to any problem using Google… but in practice, they kind of suck at ‘Googling.’

Here’s a small ‘entry-point’ lesson on the type of thing I am talking about: the other day I was teaching my statistics class, which is studying how Election Polling works, and wanted to follow-up yet again on the idea that a Binomial Distribution is different from a Normal Distribution. If it’s been a while since you taught statistics, the difference is essentially that a Binomial distribution is the probability bar chart for a specific number of outcomes, whereas a Normal Distribution looks at the generalized trend of a Binomial Distribution and makes the number of outcomes infinite. For example, if there was an election occurring in which 60% of the population was going to vote for Coretta, our made-up candidate, I could determine the percent chance that x number of people vote for Coretta out of the total number of people that I poll. 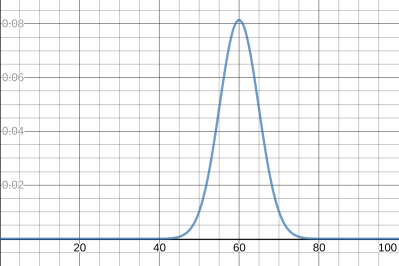 In the last moments before class, I decided that instead of reading through the problem that I wanted to give students, which starts out with the words “for a discrete probability distribution, the mean and standard deviation … [blah blah blah],” I could just ask them “what does ‘discrete’ mean in the context of the math we are doing?” (the way I phrased that question was important). Then, I could ask them to “use your resources to figure it out.”

Well, I ran this little experiment, and most of the students decided they wanted to use a computer to Google the answer. Keep in mind that we have textbooks that we use regularly, and if they were to simply go to the chapter we are currently working on, they would have found the definition very quickly because the chapter is specific to probability distributions – but the computer is the preferred tool in the modern world. You may have also noticed that the question that I asked was intentionally tricky – if I had asked “what does ‘discrete’ mean in the context of a probability distribution?” they may have used very different search terms. Instead, many students just typed into the search bar “discrete math.”

If you aren’t aware, ‘discrete math’ is a field of mathematics completely unrelated to probability distributions, and this sent many of my students ‘down the rabbit-hole,’ so to speak. My job at this point IS NOT TO JUST TELL THEM WHAT TO SEARCH FOR! It’s not about ‘hitting a standard’ right now, because the very important standard known as “Students will be able to search for and find resources online effectively” happens to not be a math standard! My job, instead, is to ask them questions that help them to become aware of the importance of search terms in getting the information that’s needed; it’s to help them become self-reflective about the fact that the question that is asked matters (this concept applies far beyond just searching Google). Rephrasing the search query to “what does discrete mean in the context of a probability distribution?” will produce different results than “discrete math.” Students may still need Tenacity in Pursuit in order to take lots of information, some of which may be tangentially related rather than directly related to their question, in order to incorporate the meaning into their own mental schemas, but that’s life!

You may not teach statistics, so this example may not be relevant to your classroom… but the point of it is certainly applicable! How can you structure your content this week in a way that challenges students to ask better questions and understand that finding/using resources is an invaluable skill? Please get in touch to let us know what you do!