For the past few weeks, I’ve been exploring the idea of using current events to inform my Senior curriculum focused on Economics and Data Analysis. In terms of inspiring new, current, and relevant curriculum, this week was almost too easy. In hopes of sharing ideas that other educators can use or create in their own curriculum, I’ll continue my kick today.

First, I started the lesson with what I thought would be a quick-and-easy question, given what my seniors have been covering lately related to the Stock Market’s recent performance. I showed this clip from yesterday’s The Late Show with Stephen Colbert, 2:19 – 3:12, asking if there was ‘data bias’ involved. “Now that point drop – as I said the largest in Dow history,” Colbert reported, “larger by over 500 points, breaking the record set just eleven days ago!” Now, I absolutely love Colbert. I think he’s fantastically witty and his nightly work is incredibly impressive, so what about this clip gives me pause?

Well, the response took a little longer than I had hoped. I asked the question: “Was this drop the worst in history?” Some students responded with “Yes, that’s what he said,” while others said that maybe that statistic wasn’t accurate. There were a whole host of other conjectures as to what the problem with this data could be, and I even pulled up the performance of the Dow by doing a quick Google search and showed students the last year’s performance and the ‘maximum’ performance: 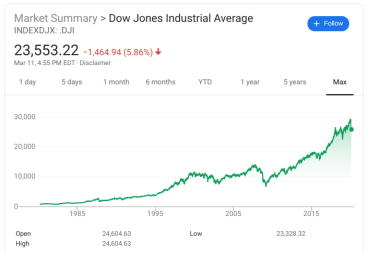 The problem with this data point is that it’s not the right metric to use in this situation. Yes, the 2,000-point drop may have been the largest in the history of the Dow Jones Industrial Average… but what would a 2,000 point drop have done to the stock market in 1995? The Dow probably wouldn’t exist anymore if that had happened! The correct metric here is not total point drop, but point drop as a percentage of the total market. Now, with that said, Colbert was certainly using data to make his point, and that’s fine… we just need to be able to recognize when data is given in incorrect metrics and take it for what it is.

I want to move on to the data on Coronavirus; however, I should first mention that of course the total drop of the stock market over the last two weeks has certainly been precipitous (around 20% from the February high!), and I should also note that although Coronavirus is a huge component of the cause of that drop, the Saudi-Russian oil-price dilemma is certainly also contributing. This episode of The Journal was a nice overview of Monday’s events if you’d prefer a free, listening-based medium.*

After this ‘Bellwork,’ if you will, I asked students to analyze this dataset, which was created by Elena Grewal, shared in an article by fast.ai, and that I modified it for student work. All I wanted them to do was give me a brief overview of what the data ‘told’ them in terms of possible numbers of deaths from the virus, and then we compared it to what the original dataset gatherer predicted (page one of this spreadsheet). Dealing with the uncertainty surrounding the denominator of our ‘death rate for Coronavirus’ equation was the challenging part for students, but a good challenge as real-world data can have uncertainty associated with it (for a number of reasons… we’ll come back to that later). The conclusion here that Grewal made is worth restating here: “Clearly the high end of killing 1.4% of the population would be very very bad, especially with the context that in a given year only 0.87% of the population dies.”

Then, I worked through interpreting a series of diagrams and graphs with students, starting with those discussed in the fast.ai article. First, the photo of a medical tent in Italy – why is this tent being used; why isn’t the man in the hospital right behind the tent? Because hospitals are full. So what we are trying to do right now is captured by this next chart from the article:

We discussed this chart, asking important questions like “Is the ‘healthcare system capacity’ line at the same height for every country?” Well, no. And another: “What are the current ‘protective measures’?” Well, essentially, they boil down to: wash your hands WAY more than you think you need to, try not to touch your face, don’t travel to places affected by the virus (or travel at all), and don’t go to places with large crowds. Those are pretty basic measures, right? Dr. Neil deGrasse Tyson said in his interview with Colbert the other night that we are currently in a huge experiment: “Will people listen to scientists?” Ha! Great question.

Then, we analyzed the section of the article quoting Liz Specht, also found here. The challenging part for students about this was wrapping their heads around the uncertainty surrounding the percentage of cases that may require hospitalization… but no matter how it shakes out, we could be facing a major strain on our healthcare system, which would not only affect people with Coronavirus but also the 65% of the country’s hospital beds that are already filled with pre-existing patients.

Next, we briefly discussed the analogous situation in the 1918 flu comparing the response in Philly (which did NOT cancel major parade events) to that in St. Louis (which did). I will mention that one student immediately said “wait, what were the population sizes of each city?” before realizing “oh, wait – it’s per 100,000 population.” 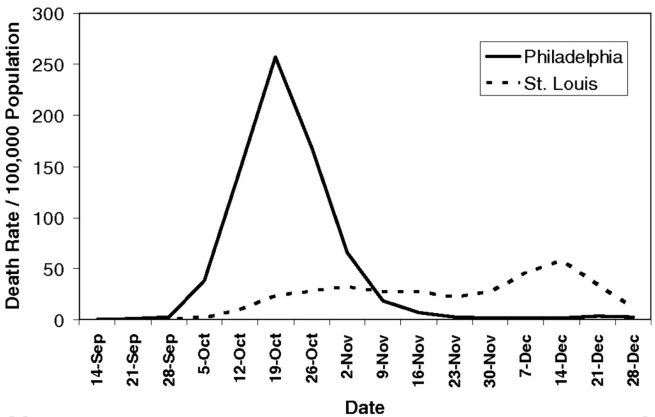 Instead of reading the following section of the article (quoted below), I switched sources so that students could make the same analysis on their own, if they so choose: “Part of the problem is that this has become a political issue. In particular, President Donald Trump has made it clear that he wants to see “the numbers” (that as, the number of people infected in the US) kept low. This is an example of where optimizing metrics interferes with getting good results in practice.” I figured that by showing the following chart instead of reading that passage, I may allow students to come to their own conclusions without entering a fully ‘politically charged’ situation.

This chart came from the New York Times article called How Bad Will the Coronavirus Get? Here Are 6 Key Factors. Obviously, this brings us back to our earlier statement/question: sometimes there are extraneous factors that get in the way of being able to collect good data (e.g. lead to uncertainty in the data), and one of them is political objectives (again, I didn’t go into the roller-coaster of our own president’s experiences in this realm… but what a story! Karma, eh?)

Finally, we arrive at the culminating event of this lesson. The following chart:

Obviously we have to start with the ‘log scale’. What is a logarithm? Well, we know that it is essentially the ‘opposite’ of an exponent, just as division ‘undoes’ multiplication. That means that if we use the standard base-ten logarithm, every increment of 1 on the logarithm actually makes our ‘answer’ go up tenfold. That’s what this scale is all about! Then, we examined the rate of spread. I wanted to especially highlight the SARS datapoint – we seem to have eradicated the virus from the planet completely in 2004 through containment. With a death rate of almost 10%, that’s a BIG deal. Wow. Given that the rate of transmission seemed to be right in the middle of the possible range of Coronavirus rates of transmission, why then were we so successful in containing it? Is it a function of the fact that because the disease was more deadly, we took containment more seriously? Or is it a function of numbers of people who travel today as compared to 2004, especially globally on planes? Although 2004 doesn’t seem that long ago, the casual nature with which we approach global plane travel has certainly continued to grow exponentially…

Ultimately, the point to be made is that the virus may not seem like a big deal to those of us who are young with healthy immune systems, but our civic duty as global citizens is to go deeper than that and think about this from the perspective of our society. If we were to get a ‘second flu’ that came back every year, killing more people than the plain-old seasonal flu, that would be a dramatic loss of human life. It doesn’t matter if you are young and healthy, you will certainly know people in your life who will be affected more drastically than you, not to mention that you will also be at risk one day, no matter who you are. As global citizens, can we make a few minor changes to our actions in service of protecting our global community, reducing the chances that this thing continues, and to ensure that we’re ready for the next one? Only time will tell.

As I concluded the lesson, a student (who by the way had been out sick for the last two days) said to the four other students around him “anyone want some of my dried mangos?!” and started handing them out straight from the bag. Goodness, human habits are hard to change…

Thanks for reading – obviously this lesson was ‘on the fly,’ because of the nature of planning it as events unfolded. However, I hope it inspires you to talk about some current events in your own classroom, and if this article has brought up questions like “hmm, we’ve been talking about things like our Healthcare system for a while now in our national conversation… how would various ideas about healthcare systems in circulation right now have changed the situation, or would they have?”, I’d love to hear them as well as your thoughts as to the answers.

* Lastly in my ‘yeah but first I want to say,’ tirade, I’d like to express a strong opinion (disclaimer has been stated): those who say we need to focus on ‘boosting the economy’ in a way that makes people start buying stuff again or taking flights again, GTFO. “There’s a joke in economics that the stock market has predicted ten of the last three recessions,” says John Hilsenrath in this episode of The Journal published one week ago. Hilsenrath goes on to talk about some of the instruments we can use to measure the health of the economy that are far more accurate than the fickle stock market. All I mean to say by this is that I’m tired of hearing from a certain pro-economy crowd that seems to think the stock market is the economy, as the market benefits a small minority of the population much more than the rest of it (people who invest – draw what conclusions you may about that demographic), and who also thinks that the economy can be separated into a bubble unto itself, separate from other components of our world it has affected, like, oh, say, the environment. How much will the environment benefit from our collective choice to fly less? You know, perhaps the Coronavirus is meant to just be a challenge in which we recognize our collective need to draw back just a bit and live a little more locally and within our means…

**Update: after posting this I found tomorrow’s data lesson: https://medium.com/@tomaspueyo/coronavirus-act-today-or-people-will-die-f4d3d9cd99ca