A few weeks ago, two events occurred in close succession that seemed so closely related that it must be one of those ‘signs from the universe’ telling me to slow down and be intentional in my daily practices. The first was that I had the good fortune of hearing Michael Donahue speak about an innovative program called BoldLeaders; the second was the Solar Eclipse.

One of the foundational contentions of BoldLeaders is simple, yet powerful: humans have basic, ‘elemental’ resources that, with use, compound to create higher-order experiences. Examples of our ‘elemental’ resources include touch, taste, voice, participation, listening, smell, and observation (among many more). ‘Compounds’ include the experiences of wonder, awe, love, fear, compassion, creativity, self-awareness, and the list continues. It is common, Michael observed of our society, for us to forget to use our elemental resources – to instead regard ‘compounds’ as skills rather than experiences (is this not true: we think of compassion as something someone has or doesn’t have – a skill?), making us focus on whether we possess the skill rather than on the elements – what we are ‘doing’ at the time we create an experience. If we slow down and practice the ‘doing’ of our elemental resources, we can develop more profound experiences for ourselves and our students.

Well, the very next (school)day, we took our entire High School down to the local park to observe the Solar Eclipse (I use the term ‘observe’ although, as I will discuss, I don’t think that’s what we were really doing). As a busy person, I hadn’t really done much research into the events of the eclipse – really all I knew was that Denver was going to be a location of 93% coverage of the sun. It turns out that 7% of the sun is a lot of light! As we sat on the grass at the park and used our Solar Glasses to see how far the moon had moved across our view of the sun, it began to dawn on us that it was not going to get very dark. A shift occurred in my mind, and I started to truly expand my powers of observation – I looked around for different, subtle changes in the environment. The entire environment around us had a soft sepia hue rather than the bright daytime exuberance. The crickets had started chirping despite the fact that it was 11:40 am. Shadows of tree leaves wrapping slivers of light on the ground had begun to transform their shape into a crescent moon… or rather sun, as the case was. The shape, though, was upside down when compared to looking directly at the sun with glasses on. Now I began to wonder what else I was missing in my observations due to a lack of prior knowledge. My friend Eric, an avid birder, noticed that the songs birds were singing were of a different variety and emanating from different species than he was expecting (he later looked it up on eBird to see if others had observed the same thing). 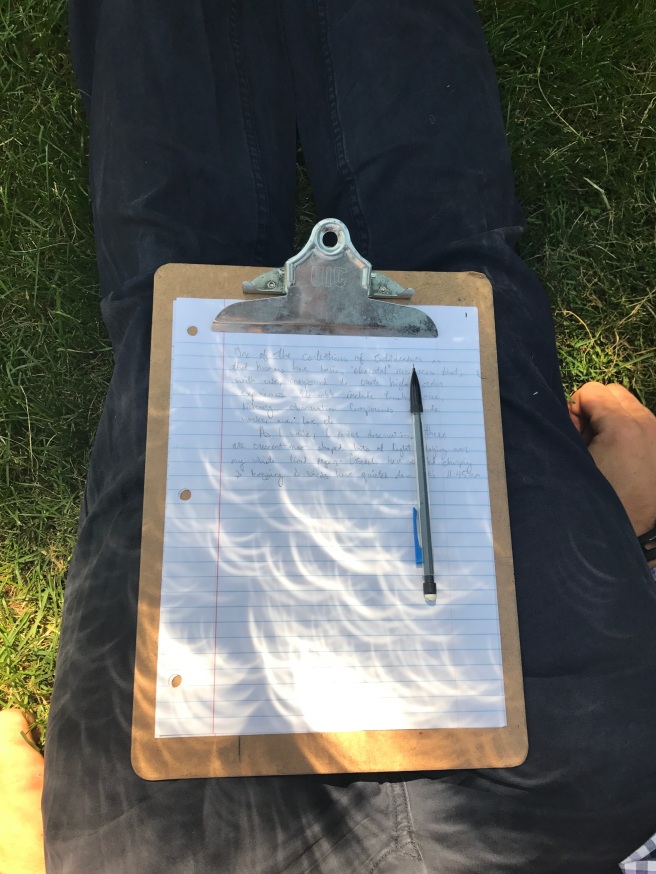 The whole experience made me realize just how much of my everyday life I miss on a moment-to-moment basis. Had I not known that a Solar Eclipse was happening, would I have even realized that anything was ‘different’ than normal!? What advantages could be gained if I chose to focus my attention more often on the process of observation? For that matter, what is the elemental resource of observation?

Well, with observation, as with all of our elemental resources, it is tough to parse out the initial presentation of material (what our eyes actually see) with the re-presentation of material (how our thoughts interpret what our eyes actually saw); thus, the process of observation cannot be passive. We are always actively interpreting material, whether we like it or not. Here’s where things get tricky. Sometimes we are actively interpreting in a conscious manner, but mostly we are interpreting unconsciously – we are judging what we are seeing whether we mean to or not! Often, judging equates to deciding what is important and what we should simply ignore. Thus, we can try to be objective to minimize our interpretations, but we’re still choosing what to pay attention to in the first place.

Maybe in life, as a whole, that’s fine. Maybe it’s OK that I don’t normally notice the singing of the birds or the way light plays amongst the shadows of a pine. Maybe it’s even OK that I might have never known a Solar Eclipse was happening had I not been primed to consciously look for it. But that’s not the case in education.

I come from a Montessori background, where Observation of students owns a capital ‘O’ and plays a critical role in the development of learners. Now that I teach at an Expeditionary Learning school, I spend less time intentionally observing – I do it more informally (read: subconsciously. Read: I judge without realizing I’m judging). This is despite the fact that Kurt Hahn himself was described (by Joshua Miner) as ‘part psychologist.’ Miner wrote “ ‘A headmaster’s job,’ [Hahn] said, ‘is to walk around.’ His antennae were always out, fine-tuned and waving, probing for each lad’s potential strengths that the might be developed, for his innate weaknesses that they might be overcome. Repeatedly he homed in on some shielded aspect of a boy’s ego that others had missed and that cast a sudden light on deviant behavior.”

With students, would it not be better for us to practice the process of conscious observation, then? Of course it would! The problem? It takes time, training, and practice. Our system is not set up for it. Just as the knowledge that the Solar Eclipse would be upon us primed my brain for the active observation (meaning making) of small signs and symbols, we – educators – need to be priming our brains for the signs and symptoms of development, its growth factors, and its obstacles. Our unique brilliance has to be in our interdisciplinary understanding – that we are not just science teachers or Spanish teachers, but psychologists, naturalists, and detectives of the human spirit. We have to craft time into our day to not only prime our brains, but also to not teach; instead, to sit and observe students as they work, and to dial in our system of capturing those observations as objectively as possible before subjectively assigning meaning to each event. And, of course, we have to observe more than we think matters, lest we overlook some shielded aspect of an ego that makes all the difference.

How will you reclaim the elemental resource of observation in your classroom, and at your school?